I kicked the ground, activated my ‘Body Strengthening, Boosted’ x2 spell, and raised the sword towards the disappearing dead priest.

The sword is rather light. Lyle’s arm was trembling two hundred years ago as he held this sword up.

…Forgive me, my unworthy son.

I made you kill me, even though you hated the idea so much.

But what happened to you guys after that? Was there a fight with Remilia or Alice?

Since the pledge has been fulfilled, those guys in the ‘Sanctuary Church, Elysium Temple’ didn’t kill you, did they?

I only hope that you guys were happy. Now and always.

“What’s the matter? Why are you afraid? You wanted this holy sword, didn’t you!?”

‘N-No! Not like this! I wanted to analyze that sword and solve the puzzle of life. And create a new ‘Ancient Artifact’, that can revive my people.’

I waved the holy sword.

“Then I’ll let you do your analysis!!”

With the blade of the Holy Sword Rinkal, I slashed the dead priest in half.

Naturally, the blade was bathed in my blood. But, in the end, it was not necessary.

Because the dead priest has started to vanish without the need to activate the ‘Purification’ spell.

“…One last question. Do you know Lyle from the ‘Fila Village’?”

I mow down the dead priest with the Holy Sword Rinkal.

“I have no use for you anymore! Get lost!! Activate, ‘Purification’!!”

With a vertical and a horizontal slash, the dead priest, whose spiritual body was ripped apart by the cross-slash, was annihilated.

Shortly after, his figure and voice disappeared ──

The holy sword’s cave once again regained its serenity.

“Yuuki!? Why are you putting the holy sword back!?”

“Well, I thought I would get scolded for using it without permission.”

“No one would complain in times of emergency. Besides, the holy sword, which had been sealed for nearly two hundred years and no one had been able to investigate it, is now awakened. They will definitely be curious about it.”

“Oops. Let’s keep this a secret between you and me.” 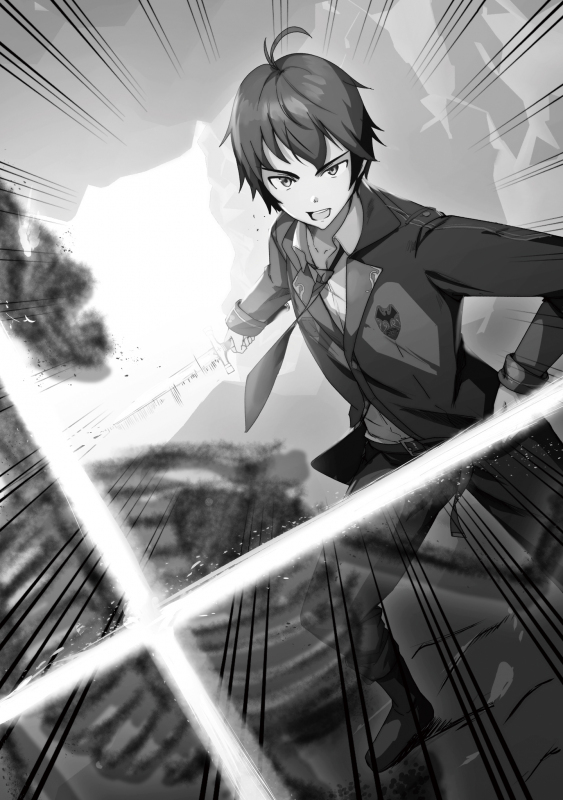 “…It’s no use even if you put your finger to your lips and act all cutesy .”

“Now that we are partners. I’ll keep it a secret.”

“But I think we should tell Her Royal Highness Princess Iris.”

“If anything, I think it would be better to tell her about it and have her on our side.”

“Will Her Royal Highness keep it a secret?”

“You should believe in her. You’re going to become Her Royal Highness Princess Iris’s knight escort, remember?”

…I forgot about that.

I was so pissed off at the dead priest of the ‘Sanctuary Church, Elysium Temple’ that I forgot about the examination.

Come to think of it, we came to this cave to be the knight escort of Princess Iris.

“There is a legend in my family about the holy sword.”

“In the Duke Sorey family?”

Odette tilted her head a little, as if thinking, and said,

“That holy sword is said to have been used only twice before. But my ancestors were convinced that the holy sword would awaken again.”

“What were your ancestors’ name, and their birthplace?”

“I don’t know that much. I just know that it was before the ‘War of the Eight Kings’. It’s just that…”

“It’s just that my ancestors did leave a note saying that no one should touch the holy sword until the right wielder had been found.”

“The right wielder… means me?”

Were Odette’s ancestors also involved with this holy sword?

Or maybe they are from the same village as me.

“I think Odette should become a knight escort of Princess Iris.”

“If you become a knight escort, you will always be by Princess Iris’s side, which will come in handy in many ways.”

“Then what about Yuuki?”

She glared at me.

“It was Yuuki who passed the exam and defeated the dead priest. I will not be shameless enough to deprive you of that achievement!”

“Couldn’t you do something about that?”

“I am a noble! From the family of a Duke! Honor and pride are to be valued naturally!”

“…Are you trying to make me angry?”

It cannot be helped.

We agreed to keep quiet about the holy sword.

I’ll at least put up with being a knight escort.

“Where’s the dead priest? Are you all okay!?”

Barnes, Demeter, and Gilvan Kiers appeared at the passageway that was blocked by the rock debris.

The unconscious Guiel Wolfgang is leaning against the rock wall of the cave.

We need to find out why he had summoned the dead priest.

The illegitimate son of the Baron Grossalia family, Yuuki Grossalia, was appointed as the knight escort ──

Before I left the place, I hacked into the holy sword one more time.

I was in a hurry earlier, so I didn’t notice that the holy sword had a wielder’s history.

‘Temporary User: Alice Carmine: Used 199 years ago: Reincarnated in the same era as my lord.’

My blood and those close to me were on the blade of the sword.

It could not have been anyone other than Alice, the one who I once gave her my ‘Magical Blood, Mistel Blood’.

There are several things I have learned from this.

It is also possible that Lyle, who became a hero after killing me, was given this holy sword.

If Lyle and Remilia devote all their efforts together, they could analyze how to use the holy sword. Those guys were ridiculously hard-working, after all.

Then Alice would understand how to use this holy sword and was reincarnated in the same era as me.

If that was the case… then Princess Iris is not a descendant of Alice.

Alice used this holy sword one year after I died.

It is impossible for Alice to have a child in that short period of time.

Alice had just recovered from the ‘Death Crest Disease’ at that time. It would be impossible both physically and in terms of age.

In that case, Princess Iris’s resemblance to Alice may be a coincidence… or she herself may be the reincarnation of Alice.

Remilia did have Alice’s brother or sister in her belly at the time. If her descendants were the ancestors of Princess Iris, and Alice’s soul dwells in that family lineage, that would make things easier.

“…Seriously, that child is such a pain in the ass.”

In the first place, this is not right, Alice.

Even if I had died, why would you think of reincarnating yourself?

Was it because you think that you could reduce the two hundred years age gap to zero? You did not think you would fail, did you?

If Lyle and Remilia had found you, they would have stopped you… or not.

I cannot imagine those two stopping Alice. I feel like they’re sending Alice off once they know for certain that she can reincarnate.

Lyle and Remilia are ridiculously hard-working and talented, after all.

Had they acquired ‘Ancient Magic’ and ‘Ancient Artifacts’, they also could have destroyed the ‘Sanctuary Church, Elysium Temple’. By the way, ‘Fila Village’, where I was, had a 100 percent literacy rate. The literacy rate in the royal capital at that time was just 15 percent, and all the villagers had mastered common magic.

If Lyle had been recognized by the sanctuary church for his achievement in killing me.

And if the people of ‘Fila Village’ had used that to gain knowledge of ‘Ancient Magic’ and ‘Ancient Artifacts’.

── I have a feeling that they would send Alice to this era without hesitation….

“So you’re in this era. Alice Carmine.”

I will find you.

Whoever you are in this era, I’ll find you for sure. So wait for me.