Xellos nii-sama peered at my face

“‘Lindbel Magic Guild’ is a place where high-ranking nobles attend. That’s why the royal family also learns magic there as trainees. In other words, Her Royal Highness has already decided to become a trainee there to learn magic. So you mean as someone who is representing on the guild’s behalf, she is coming here to check on Xellos nii-sama’s abilities, right?”

This matter was previously discussed so many times ever since tutor Kachel arrived at the mansion.

‘As a result of my guidance, Xellos-sama will be studying ‘Ancient Magic’ in Lindbel Magic Guild at the royal capital. It’s not a place for Yuuki-kun though’.

“But Her Royal Highness went out of her way to come here? To the territory of a Baron?”

“It was worth writing all of those recommendation letters. Of course, if you didn’t have as much magic power as Xellos-sama, it would have been a waste of time even if I did make all that effort”

“The Magic Guild is a place that manages and maintains ‘Ancient Magic’. A high level of magic aptitude is required to become a trainee there. The 8th princess, Iris Restia-sama, has a very high aptitude for magic and is already a member of the guild. That’s why she’s been chosen to be in charge of the examination this time”

“This is indeed a very rare occurrence”

Having said that, the tutor, Kachel, looked at me.

“On the day Her Royal Highness arrives here, I’d like Yuuki-dono to remain inside the mansion”

“The illegitimate child cannot be seen by Her Royal Highness. I want you to close the curtains and conceal yourself without making any noise and don’t leave the detached building”

The tutor, Kachel, patted Xellos nii-sama on the back.

“Come on. Xellos-sama, please tell this to Yuuki-dono as well”

It’s been a long time since I’ve seen Xellos nii-sama face to face like this.

Nii-sama has blond hair and blue eyes. He got his hair from Father and the eyes from the first wife.

That’s why I can’t come to hate Xellos nii-sama.

“Yuuki…do not appear before Her Royal Highness”

“Her Royal Highness is a person of royal blood in this country. As an illegitimate child…you’re not permitted to appear in front of her. You…you…”

Suddenly, the tutor, Kachel, tapped Xellos nii-sama on the shoulder.

“How can you show your dignity as an older brother by speaking in such a manner?” 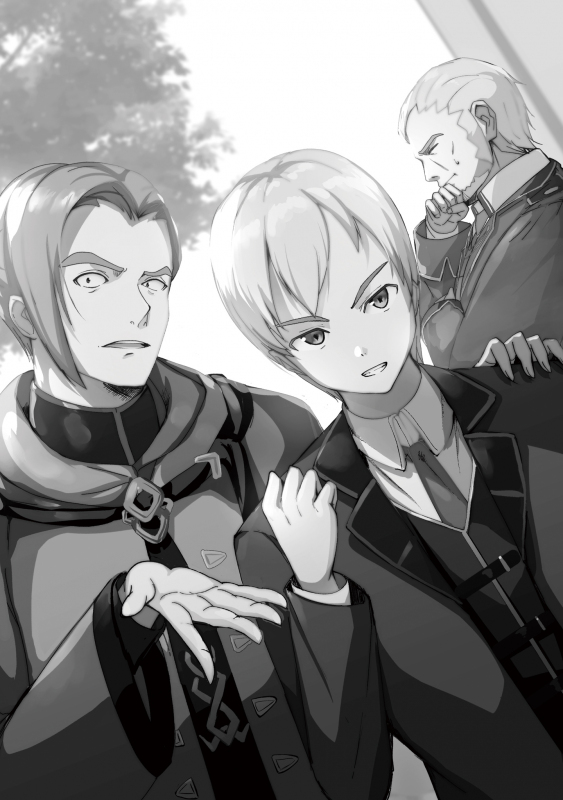 “Say it clearly. What do you think of Yuuki-dono, go on!”

Xellos nii-sama seemed to hesitate for a bit, then looked straight at me.

“You, the child of an unknown woman, was made by Father while he was out on the battlefield. Such a person could never be seen by Her Royal Highness. Listen, you are absolutely not allowed to leave your room on that day! Do you hear me!?”

“Sure, I’d be happy to comply”

Why would I want to meet a princess?

I was once called the Demon King, albeit it was a mistake.

Dean Nosferatu was feared (unilaterally) as the ‘Immortal Mage, Lord of Nosferatu’. I’d want to keep as much distance as possible from anything related to royalty.

After all, they were quick to hand over the adventurers coins and tell them to subdue the Demon King.

A self-proclaimed Hero also came to me in my previous life.

She was starving, so I fed her a meal and told her I was harmless, and she understood.

After that, she worked hard and became a guard for ‘Fila Village’. Incidentally, she was Lyle’s grandmother.

At any rate, things like royal families and princesses are an interminably annoying existence.

I don’t want to get involved with them even after I’ve reincarnated.

“Rest assured, Xellos nii-sama. I will never appear before Her Royal Highness. As nii-sama said, I will close the curtains and make sure that I’m not seen”

“If you’re still worried, I’ll stay at an inn in town on that day. That way, I definitely won’t be in the sight of Her Royal Highness. With Father’s permission, I’d be happy to travel somewhere far away, too…”, I continued.

Eh? Father…why are you wiping your eyes?

“I wonder if I had made a mistake? In order to join the ranks of the high-ranking nobles, I have cornered my child to this extent. I…”

Xellos nii-sama clenched his fists and glared at me.

“I only told you not to show your face during the examination. But going to town or going on a trip…is that sarcasm!? Are you protesting on my examination, Yuuki!?”

In fact, I’m rooting for you, nii-sama.

I’ve longed for it in my previous life. An older family member.

So I don’t want to be misunderstood. Let’s get things straight here.

“I’m content with just being able to live with the Baron’s family. I don’t want to push it to meet Her Royal Highness. I just want to live within my own means”

“As a princess, she would have learned etiquette that even Father doesn’t know of. I don’t want to become a disgrace to the family when interacting with such a person. We’d be a laughing stock to the other nobles”

“If possible, I’d like to go to a public school. I want to learn more about human society by learning and interacting with the general populace. Honestly, I don’t really care about things like ‘Ancient Magic’. With the destruction of the ‘Sanctuary Church, Elysium Temple’, it shows that power alone can’t solve anything”

“In short, I really don’t think that there’s any value in me meeting the Princess. So there you have it, my response to Father, Xellos nii-sama, and Kachel-sensei. I pray that nii-sama can join the guild and learn ‘Ancient Magic’”

It’s not sarcasm or anything that I want to hide when the princess comes, I do mean it when I say I don’t want to meet the princess.

Of course, I don’t want to interfere with Xellos nii-sama either. He’s a very important family member after all.

If I said that much, I’m sure nii-sama would understand—

“Pushing it!? Beyond one’s means!? Becoming a laughing stock to the other nobles!? Are you saying that I’m overdoing things!? Joining the ‘Magic Guild’ is beyond my ability, is that what you’re saying!!?”

“How did you end up with this argument, Xellos nii-sama!!”

“You should be grateful just by being able to stay in this mansion! You illegitimate child! You’re the child that Father made while he was out on the battlefield!! And yet, how dare you look down on me!!”

“Yuuki didn’t mean to belittle you! Cool your head, Xellos!!”

“In that case…Father. Please give me the chance to show Yuuki my abilities!!”

“Father should know how strong I’ve become. Please let me prove the power of ‘Ancient Magic’ that was taught to me by Kachel-sensei to Yuuki!!”

“Baron-sama. I have the same opinion, too. Please grant Xellos-sama permission”

The private tutor, Kachel, stepped forward. He was glaring at me with a side glance.

“Yuuki-dono probably doesn’t know the value of ‘Ancient Magic’. Therefore, I think it’s necessary to drive into him the power of ‘Ancient Magic’ so that he wouldn’t be disrespectful in aristocratic society in the future”

“I understand. Let’s find out just how strong Xellos is”

Father looked up and nodded.