“Listen to me, you stupid brother!!”

I struck the clinging bird with my fist.

The bird made of magic power dispersed with a single blow.

Naturally, with two ‘Body Strengthening, Boosted’ spells in effect, the fists themselves have also been strengthened.

The back of my hand was ripped open and bled, but that’s okay!

“Listen to me for once, you stupid brother!!”

“The effects of the ‘Ancient Artifact’s replica’ change depending on how you use your magic power! That’s how it’s supposed to work!!”

“T-That’s bullshit! How are you faster than me!!?”

“I understand. I’ll tell you then! I’m actually the reincarnation of a mage who died two hundred years ago! I have a mysterious aptitude for ‘Ancient Magic’! Because of that, the effect of the spell is doubled. I can move twice as fast and have twice as much physical strength!! So how did that sound? Do you understand now? You stupid brother!!”

“Even now, you still talk nonsense!”

Xellos nii-sama kicked a tree, changed his direction, and came running towards me.

“I know! You don’t like illegitimate children, do you!?”

“You’re wrong!! You annoy me! I joined the ‘Magic Guild’ to prove that I’m superior to you!! It was troublesome! The ‘Ancient Magic’ and the studies!! If it weren’t for you, none of this would have happened!!”

Nii-sama started drawing out two intricate crests with his finger.

A bird of the wind and a lizard covered in flames appeared from the two summoning circles.

“Summoning magic!? Isn’t this the part where nii-sama and I exchange blows!?”

“I’m a legitimate child! The one who will join the ‘Magic Guild’ and raise the Grossalia family’s name, Xellos Grossalia! That’s why I’ll defeat you with everything I’ve got!!”

I ran towards nii-sama with the speed boost from the ‘Body Strengthening, Boosted’ spell.

“Go to hell! I’m not going to let such a tiny monster like that stand in the way of the ‘Monster, Nosferatu’!”

I use my fists to slay the blue bird and my dagger to kill the flame lizard.

In the meantime, I took a few steps to close the distance while nii-sama activated the summoning magic again.

As expected of ‘Ancient Magic’ summoning. It’s fast and can be used continuously.

I’m going to beat up Xellos nii-sama and Kachel so that I won’t have any regrets!

“Now, do you understand that I’m the ‘Monster, Nosferatu’? You stupid brother”

I held my fists over my head.

If I hit him with two ‘Body Strengthening, Boosted’ spells still in effect, he would die, so I canceled one of them and kept only one active.

After all, Xellos nii-sama has to manage the Grossalia family.

Just like a fight between human brothers, I’ll hit him just enough to keep him from getting hurt.

My fist hit Xellos nii-sama in the stomach. 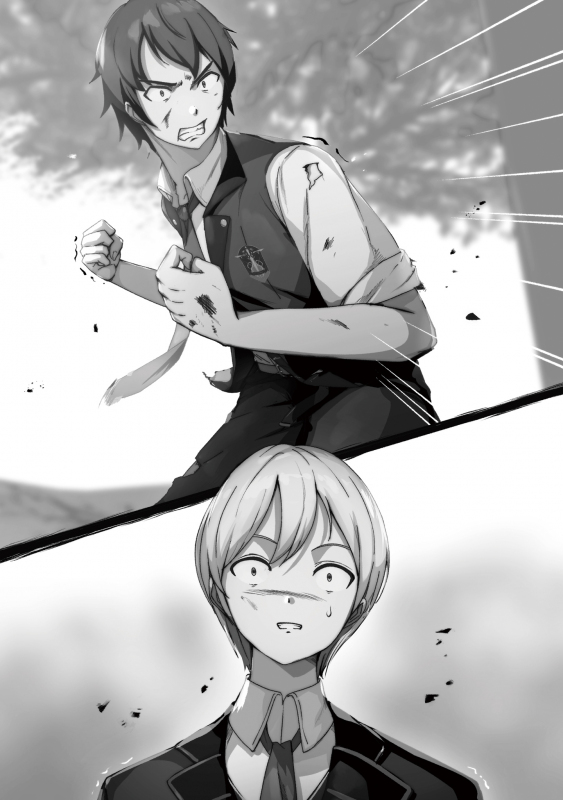 Xellos nii-sama’s body tumbled and lay down on the grass.

The amulet that nii-sama was holding was also blown away.

Blood began to flow from the wound on my right hand and splattered all over Xellos nii-sama’s face and arms.

As I thought, it was too reckless to fight against familiar spirits with my bare hands….

“Get up, Xellos nii-sama”

I grabbed Xellos nii-sama by the arm and pulled him up.

“If you want to remold the Grossalia family as you see fit, so be it. But I won’t allow you to mess with my family. If I stop by here in the future and see that something happens to Rumia and Martha, I won’t forgive you, nii-sama. I don’t care if it’s the Grossalia family or the magic guild. I will use my entire being as a monster… to crush you”

Nii-sama’s body began to tremble, and he plops down on the ground as I let go of his hand.

I revealed my true identity and used twice the amount of ‘Ancient Magic’. I’m completely exhausted.

…Let’s get out of here before someone comes.

“What on earth are you guys doing over there?!!”

Suddenly, I heard a voice.

A person walks towards the exit of the forest. It’s Barnes-san with the axe.

“We don’t allow examinees to fight against each other! Just what on earth are you guys doing here?!!”

Xellos nii-sama looked at Barnes-san and me.

I revealed my true identity to nii-sama, and he will probably tell Barnes-san about it.

After all, nii-sama has no reason to stand up for me.

Barnes-san is the princess’s bodyguard. There’s no reason for him to let me, the ‘Monster, Nosferatu’ go.

I’ll ask Dick and the other bats to slow him down, and then I’ll use that opportunity to escape to the mountains. After that, I’ll be leading a vagabond life.

If possible, I wish I could have said goodbye to Martha.

“This is… just a fight between brothers. Barnes-sama”

“I was the one who charged at Yuuki, and he fought back. That’s all”

I put my face close to nii-sama’s ear.

“…Aren’t you going to tell him my true identity?”

“…If anyone finds out that there’s a monster in the Grossalia family, the family would be ruined. As the legitimate son, I have to protect our family”

“…And besides, I have no way of confirming who you really are. But you see… I’ve lost. You’ve made it clear that I’m no match for you……. It’s somewhat refreshing”

Nii-sama slumped his shoulders tiredly and picked up the fallen amulet.

“I knew it was a lie that you were bad-mouthing me. But I have to make the Grossalia family comparable to the high-ranking nobles. To do that, I need to obey Kachel-sensei. That’s why I had to believe in his words. While I was thinking about that… I… began to think that what that man had said was… true…”

“…Nii-sama is too serious”

“You haven’t called me your younger brother for a long time. Xellos nii-sama”

“Yeah, you’re my younger brother. So don’t go off on your own”

“I don’t want Rumia to cry after you’re gone, and I also don’t want Her Royal Highness Princess Iris to get suspicious. I have to protect the Grossalia family. I can’t let our family be ruined because of me. So… don’t leave”

“……All right. Seriously. Humans are troublesome”

It seems like nii-sama is not going to tell anyone about me.

If he is fine with that, then… all is well.

There’s no way for me to prove that I’m a reincarnation of Dean Nosferatu either.

It also seems hard to live a vagabond life at the age of thirteen.

I can always leave at any time, after all.

“Are you done talking? So what do you want to do now? Will you continue the examination, Xellos Grossalia?”

Barnes-san thrust the butt of his axe into the ground.

“The aptitude examination also includes fighting me. You don’t have to defeat me. You just have to use magic to avoid the attack and get through the forest. If you can do that, I will approve you to join the ‘Magic Guild’”

Nii-sama brushed off the dirt from his trousers and stood up.

As it is, he bowed deeply to Barnes-san.

“I don’t have what it takes to join the ‘Magic Guild’. I’ve… strengthened ancient magic with dirty means ──”

“Are you sure you want to withdraw?”

Barnes-san put down his axe and then took out a small bow and arrow from his back instead.

Slowly, Barnes-san tied the black cloth to the arrow.

As if waiting for nii-sama’s reaction, he pointed the arrow to the sky and drew the bow, but nii-sama said not a single word.

So Barnes-san fired off the arrow to the sky.

“With this, Her Royal Highness should now know the results of the examination. Well done, you two”

“May I ask you a question, Barnes-san?”

“What is it? Xellos Grossalia”

“Is it true that Yuuki saved Barnes-sama?”

I was hoping he would dodge that question.

Suddenly, there came screams from the other side of the forest.

That’s where the princess is.

“We’ll talk later. Let’s head back to Her Royal Highness. Follow me!!”

Barnes-san started running towards the entrance of the forest.

Xellos nii-sama and I looked at each other and then followed suit.

For a moment, the face of the princess appears in my mind.

The face looked just like Alice, Lyle’s daughter, and Lyle, who I deemed my child in my previous life.

I once again activated my ‘Body Strengthening, Boosted’ x2 spell.

Xellos nii-sama can’t keep up. He seems to be wobbling on his feet. Probably because of that attack I did earlier.

I overtook Barnes-san and continued onwards.

If she didn’t look so much like Alice, I’d leave her alone.

Lyle and Alice are both… resonating in my mind.