“Your Royal Highness Princess Iris, may I ask you a question?” 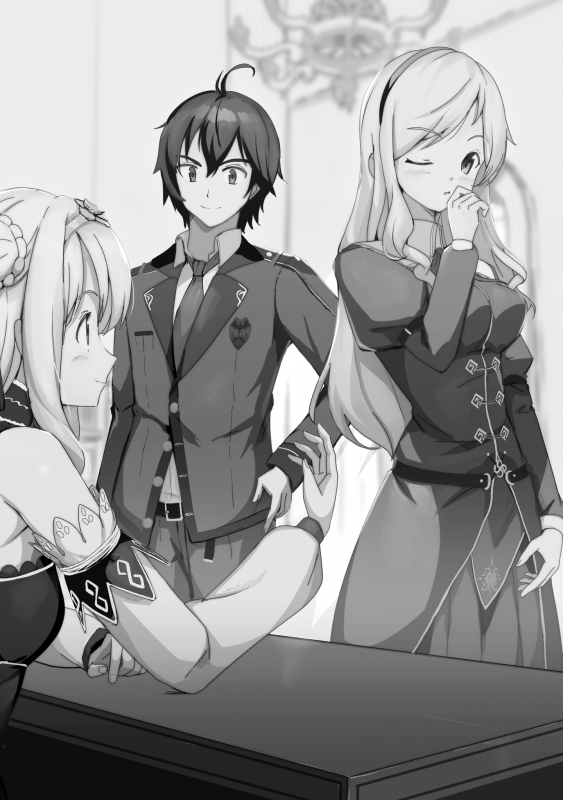 “Do you have any ancestors called Lyle, Remilia, or Alice?”

Her Royal Highness Princess Iris repeated the names and then stared at me.

“I’ve only known my grandparents, but… I don’t think there were any.”

“Why did you ask that, Yuuki-sama?”

Oh no, I had not thought of that.

As the village’s guardian deity, I’m worried about their news… No, this would not do.

Princess Iris looks exactly like Alice, who was a family member 200 years ago… No-no, this also would not do.

“In my dream, the three of them spoke to me. They told me to protect Her Royal Highness Princess Iris.”

“Perhaps they were the ones who guided Yuuki-sama to meet me.”

Sorry, Lyle. I borrowed your name at random.

I will be sure to pay you a visit when I find your grave, so for now, you will have to excuse me.

“Unfortunately… There is no record of anything before my grandparents’ time. Even if those people are really my ancestors… there is no way to know.”

The Duke’s daughter, Odette, continued from where the Princess left off.

“The Eight Kings fought each other in pitched battles. Because of that war, most of the old records have been lost. Along with most of the ‘Ancient Artifacts’ as well, and those that remain are still sealed.”

Princess Iris clapped her hands again. It seems to be a habit of hers.

“It’s about the examination to choose a knight escort. I’ve heard that the ‘Magic Guild’ has decided on the examination venue. The location is the cave where the holy sword is stowed, on the shallowest floor of the ‘Capital of Ancient Magic Civilization, Elysium’ ──”

“Please excuse us, we have visitors!”

A guard shouted on the other side of the door.

“The Marquis’s son, Gilvan Kiers-sama, and the Count’s son, Guiel Wolfgang-sama, are here to greet you. What would you like us to do?”

“… So much for our private time together.”

Her Royal Highness Princess Iris returned to her seat and took a deep breath.

“Please let them in. I’d like to talk about the examination together.”

The guard answered, and the door to the parlor opened.

Behind it stood two boys about my age.

“This is different from what was previously said, isn’t it, Your Royal Highness Princess Iris? I was told that the selection of the knight escort was supposed to be impartial, but I was surprised that you’ve already met with two of them first.”

He was a red-haired boy, wearing gold embroidery clothes with the family crest of a fire-breathing dragon. While fixing his red hair with his fingers, he stared at Odette and me.

“In the first place, the selection ceremony is a waste of time. The one who deserves to be Her Royal Highness’s knight escort is this Gilvan Kiers. Isn’t that right, Your Royal Highness?”

“Shut up, Guiel. Do you think that a member of a mere Count family is equal to me?”

Behind Gilvan Kiers was a boy with gray hair

He is a petite boy with glasses. Looking all frightened, he hides behind Gilvan Kiers’s back.

Odette Sorey said that the other two knight candidates had formed an alliance.

So that is these two. I can tell at a glance who is in a better position.

The power dynamic of nobles. Humans really do like this kind of thing…

“The most incomprehensible thing is that a Baron’s illegitimate child is here.”

I mean, is it a rule of the high-ranking nobles to point fingers at others?

“Hmm. You seem to know your place.”

Of course, I know.

In the first place, I’m the reincarnation of the ‘Monster, Nosferatu’. I cannot become a human no matter how hard I try.

This is probably the first and the last time I’ll be affiliated with a magic research institution in human society. It will be a very short memory in the next 200… or 300 years of my life.

“And that’s why I’m not going to withdraw. It’s a good experience, after all. Whoever ends up embarrassed, it will be a sweet memory in the end.”

“So I’m convinced to take the knight selection examination. Please tell us the details of the examination. Your Royal Highness Princess Iris.”

I turned to Princess Iris and knelt down on the floor.

Odette Sorey does the same.

The Count family’s Guiel Wolfgang tries to calm Gilvan Kiers down ── Reluctantly, he follows suit and knelt down as well.

“The examination will be decided by the ‘Magic Guild’.”

Princess Iris placed a sheet of parchment before us, one at a time.

The parchment contained a sketch of the cave.

“Do you know that there is an entrance to the ‘Capital of Ancient Magic Civilization, Elysium’ in this section of the royal capital?”

“… I’ve heard that there is a passage that only the ‘Magic Guild’ can enter.”

“… Guiel. You… I’m supposed to be the one answering here!”

answered Guiel Wolfgang, and Gilvan Kiers poked him in the back.

“Guiel Wolfgang is right. In the first place, this royal capital was built to manage the ‘Capital of Ancient Magic Civilization, Elysium’. The ‘Magic Guild’ is responsible for the management of the city. And this time, the examination is for the ‘Magic Guild’s elementary apprentices.”

Princess Iris looked at me.

After nodding lightly, she continued.

“The purpose of this examination is to investigate the cave described on the parchment. It is located on the top floor of the ‘Capital of Ancient Magic Civilization, Elysium’. There have been reports of undead appearing in the cave there. You will check if the holy sword in the back of the cave is safe. Demeter, a C-rank mage, and General Barnes will be accompanying you that day. The first one to reach the holy sword will be appointed as my knight escort.”

Two hundred years ago, the ‘Sanctuary Church, Elysium Temple’ discovered a large number of ‘Ancient Artifacts’, including the weapon that killed me in my previous life.

I am allergic to the long sword because I was stabbed with it.

“Can I ask you a question?”

“What happens if two people reach the holy sword at the same time?”

“In that case, there will be a final test. If there is mutual agreement, we’ll assign one of them to be the knight escort and the other to a similar role.”

Odette Sorey looked at me.

Confirmation of an alliance, huh?

If it is okay for both of us to reach the holy sword at the same time, I guess that means we should cooperate with each other during the exam.

“Other details will be provided later by the person in charge. Do you have any other questions?”

No one had any questions. I do not have anything particular to ask either.

“The examination will start in three days. Please get in shape by then. I wish you good luck.”