It was that one day in the classroom after school when Maria said that to me.

“Didn’t we have a test on basic fire magic the other day?”

“Oh, the test the day before yesterday?”

“Yes, that’s it. The results of that test will be announced tomorrow. So have a match with me.”

“You’re a subject of my observation. Since you moved to this academy, there are many incomprehensible incidents that it would be absurd not to pay attention to you. I suspect that you are also responsible for Abe’s disappearance from the academy.”

Maria pointed at me, stretching out her small chest.

She has good instincts. Because, as a matter of fact, I am the one who caused Abe to disappear from the academy. 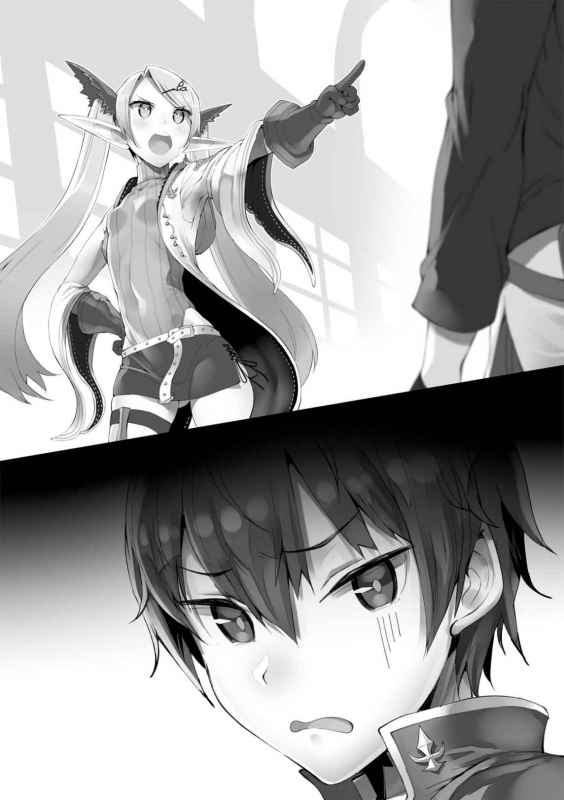 “Anyway, have a match with me tomorrow. I’m telling you that I’m going to personally measure whether or not you’re capable of representing the class, so be grateful. If you are capable, then we’ll be fighting together as comrades in the class competition.”

If I remember correctly, I was chosen to represent the class as a magic swordsman.

“…I’ve been wondering for a while now, have we met before?”

When I asked, Maria tilted her head and replied, “Well”.

“I only know the Elven Forest and the Demon Academy. You’re the first of the inferior species, human, that I’ve met.”

“Anyway, have a match with me tomorrow, okay?”

After that, she left the classroom gallantly.

── In other words, a girl who is a pain in the ass seems to be interested in me.

In today’s morning homeroom, the results of the basic fire magic test are to be announced.

Maria, who was sitting in front of me, turned around and grinned at me.

“I’m going to test your abilities today. You seem to be hiding them. Well, even if you are, it is impossible for me, a beautiful genius, to lose.”

How should I put it? There seems to be a sense of rivalry here.

From what I heard, Maria is always at the top when it comes to examinations.

So, does that mean she is concerned about the uncertain factor of my sudden arrival that could threaten her top position?

No, that can’t be it. She said we are fellow class representatives, and she, with expectations, plans to test my abilities.

“Well then, I’ll announce the test results. As is customary practice in the academy, I’ll call you in order of your scores.”

When Maria heard this, she spoke to me in a hushed voice.

With a cough, Merlin continued.

“Here’s the test results. First place goes to two students. Tied for first place with 100 out of 100 points.”

“You and I are tied for first place with a perfect score. It seems that our capabilities cannot be measured in this basic test. Well, I’m glad I miscalculated because I would be in trouble as the leader of the class representatives if I showed the bottom of my abilities in this basic test.”

“Huh? But didn’t you call me an inferior species?”

“I am a meritocratic person. I think humans are inferior in magic, but it’s a different story if they showed their abilities. Since you have got a perfect score on this test… you should be useful to me as a member of the class representatives from now on!”

Maria held out her right hand to me. It seems that she is asking for a handshake.

And before I knew it, all eyes in the class were on us.

Well, I guess it’s only natural when she talks this loudly.

“I feel like shaking hands now would be a hassle…”

I had no choice but to take her hand and shake it. Maria nodded in satisfaction.

It was at that moment that Merlin called out my name.

“The first person to tie for a perfect score was student Ephthal.”

I stood up and bowed my head.

Merlin and I looked at each other and smiled as if it was natural. There’s no way I could have made a mistake on a test of that level other than a careless mistake.

“Next, the second student in the tie for first place with a perfect score is ──”

Maria then stood up and brushed her hair back.

Looking at her from behind, I can tell that she has her arms crossed and a smug “Well, of course” look on her face.

“Student Anastasia. Next, student Maria with 96 points, and the next is much lower. Student Maris with 74 points. Next, 70 points…”

Anastasia stands up and bows her head. And ──

She doesn’t move an inch even when her name is called. She just stood there with her head down.

Just now, with so much assertion that she declared, “You and I are tied for first place with a perfect score.”…

── This is embarrassing.

After a while, Maria slumped down in her chair. Then she plopped her face down on the desk with her shoulders trembling.

“Ephthal! I was careless last time, but this time I stayed up all night studying for many days!”

Today is the announcement of the results on the wind magic theory quiz.

Incidentally, it was just a quiz this time, so it does not seem like they will announce the names in the order of the scores.

“Hehe, how is it? My abilities as a beautiful genius have been demonstrated.”

Incidentally, Anastasia scored 98 points this time, which is probably just a careless mistake.

“Hehe, now that I’ve beaten all the small fries. What’s your score? Well, even if you scored 100 points, I still won’t lose. After all, I have a perfect score of 100 points.”

Maria then snatched my answer script from me.

Maria took a look at my answer script. Her mouth repeatedly opened and closed like a washed-up fish gasping for air.

Merlin on the podium greatly nodded and said this in a dignified voice:

“It’s just bonus points because of how brilliant the answers were. There shouldn’t be anything odd about it, right?”

Well, unlike the previous exam, which was full of simple and straightforward questions with no room for bonus points, this quiz was, in all likelihood, Merlin’s prank on me.

In fact, these questions can even be solved with a rudimentary knowledge of magic.

However, they are questions that use constant, which was unproven in my era.

So, as a scholar, I can’t help but fall for the questions that say, <<Provided that, the Euryale constant is 3>>.

To be precise, it would be 2.997. Even though I hadn’t yet proven it at the time, but for some reason, I just know…

I challenged the quiz under the theme of proving such a curious constant.

As a result, I wrote the process of proving the constant on the back of the answer script, and I did it just barely within the time limit.

Well, I’ve read all the modern magic theories, so I responded to Merlin’s prank in the form of a complete answer.

But that aside, Maria was glaring at me with a red face.

“This is favoritism! Just because Merlin-sama likes Ephthal a little bit doesn’t mean you can be so blatant about it!? I know about the bonus points system, but that’s just an extra 3 or 4 points at best, isn’t it?”

“Student Maria, if you have any objections, then I’m all ears. But I don’t have a lot of free time either… so, can you have a look at student Ephthal’s answers properly first?”

Maria dubiously… looked over my answer script and turned pale as she looked at it.

“What is this? I don’t even know what you have written. What is this…? Just what is this answer script?”

Maria thrust the answer script back at me with a dumbfounded look.

So, the next day.

We are having a hands-on training session at the sports ground on how to enchant weapons with magic.

I with a sword, and Maria with a bow. In other words, each of us is supposed to use the weapon that we are best at.

“I understand that you’re a theoretical absurdity. But magic is a world of application.”

And so Maria came at me again…

She is really a pain in the ass.

“The elves are forest folk, so naturally, I have learned hunting magic since I was a child. In other words, the same goes for archery.”

Maria smirked and then shot an arrow at the target while laughing loudly.

The arrow is accelerated by wind magic.

And then, the arrow with increased speed pierced the center of the target with great force. A powerful “Whoosh!” could be heard as the arrow hit its mark.

“Hehe, what do you think? Of all the people who can’t even use enchant magic, I, a first-year student, managed a perfect enchant… You won’t get to see it quite often, you know?”

It seems that everyone already knows that I’m not just any ordinary person, so it should be fine if I use level 2 enchant magic.

With that said, Maria works well as a coal mine canary, huh?

Apparently, she is the top first-year student. Therefore, the same or a step ahead of it… will tell you that this is a line where I would not stand out as an outsider. [Editor’s Note: So basically here, Ephthal is considering using the same level or one step above Maria’s enchant magic, and supposedly this won’t make him stand out too much.]

As for me, it is annoying to be told that I’m riding Merlin’s coattails of influence, but with that being said, I certainly did get special treatment. Deservingly, if I don’t show a certain level of my abilities, Merlin’s honor will also be damaged.

So, with all of that considered, let’s go one step ahead of Maria.

The mock sword was covered with ice.

Good, the ice sword is now complete. It should easily break through something like a defensive fire barrier magic.

By the way, I can use level 6 or 7 enchant magic if I put my mind to it, but anything above that will be a challenge.

After all, I would like to complete the ultimate Thunder God Sword by enchanting it with ‘Level 10: Emperor of the Thunder God, Ephthal’.

“…I can understand if you’re an elite upperclassman. But… you’re in the same year as me? Lies… this… must be a lie… No… but that’s a real level 2 magic sword…?”

For a moment, Maria almost collapsed on the spot, but she held her ground.

“H-H…Hmph, it seems like you’ve got some abilities. But don’t think you’ve won!”