“Please run away, Ojou-sama! You can’t deal with the ‘Dark Bear’ yet!!”

“How could I leave the old man and run away!?”

The girl readied her sword.

She’s covering the wounded old warrior behind her back and stares at the enemy in front of her.

It was just before dawn when her carriage reached the foot of the mountain.

She entered the mountain with the old man for exploration before the place became busy with people.

They were supposed to have moved according to the map.

However, the road suddenly got cut off. Due to that reason, the two lost their way and entered the monster’s habitat.

“That bastard. What did he mean by ‘A safe mountain free from monsters’? Even the map is rubbish!”

“We have to get through this first!!”

“I’ll be your shield. Ojou-sama, your magic”

The old warrior used an axe with a long handle as a cane to stand up.

His left arm was badly wounded after the ‘Dark Bear’ had caught him off guard.

The bleeding was stopped with magic, but it will take some time to heal completely.

The bear which is twice the size of an adult is standing on its hind-legs.

The monster’s eyes are locked on the old warrior and the girl. There’s no way they could escape.

“── The source, a crucible of heat. Like the lava flowing from the Earth, the breath of scorching heat is shown here”

While recalling the incantation she learned, the girl begins to draw a crest in the air.

“I’ll buy Ojou-sama some time to chant. I won’t let you pass me! Dark Bear!!”

The old warrior swung his axe.

There was a thunk sound, and the blade cut into the arm of the ‘Dark Bear’.

Several flames formed around the girl.

All at once, the flames rush towards the ‘Dark Bear’.

“It’s working, Ojou-sama. Hang in there and finish it off!!”

The strength of ‘Ancient Magic’ lies in its ability to fire off continuously.

As long as the spell passes through the ‘Circuit’ of magic power, the same magic can be unleashed in rapid succession.

“That was a close call. Seriously, when it comes to his information…”

A roar can be heard. And it’s close, too.

The girl re-read the parchment in her hand.

‘This mountain is rated A. No monsters. Even if there are any, it will be some low-level monsters. Safety rating AA. Ideal for the examination site. It’s a place with a nice view, too. Please come anytime’ ── that’s what was written on it.

That’s why the girl and the old warrior came here to check it out together.

However, the ‘Dark Bear’ that attacked them is a monster with a danger level of ‘C’.

Only intermediate level and above adventurers can fight it.

How can a place where such a monster exists be rated as a ‘Safety Rating AA’?

“Old man! This way. Let’s get out of here now. While we’re running, your medical treatment ──”

The trees on both sides shook.

What appeared were two ‘Dark Bears’ that were even larger than the previous one.

With rage glowing in their eyes, the two ‘Dark Bears’ raised their arms at the girl.

The claws that were swung down were received with a sword. But the sword couldn’t completely extinguish the bears’ blow.

The girl was thrown to the ground and rolled to a stop after hitting a tree.

One of the ‘Dark Bears’ heads for the girl and the other one is heading towards the old warrior.

The girl coughed involuntarily as she tried to chant to cast magic.

She hit her chest when she fell. Right now, she can barely breathe, let alone speak properly. Due to that reason, she can’t use magic.

As if to drown out the girl’s scream, the ‘Dark Bear’ swung its huge claws down.

Those claws cut through the air.

“There are a lot of monsters on this mountain. It’s impossible to use it as an examination site”

The next thing she knew, she found herself flying through the air in the arms of a boy she didn’t know.

His hair and eyes are black. He is about the same age as the girl. But his arms are strong and enveloped the girl.

This boy was the one who saved her.

He rushed over to the scene just before the attack of the ‘Dark Bear’ hit and jumped away after grabbing the girl in his arms.

Neither the girl and the old man, nor even the ‘Dark Bear’ noticed his approach.

Even with the ‘Body Strengthening, Boosted’ magic of ‘Ancient Magic’, such speed shouldn’t be possible.

“T-Thank you very much. And who might you be!?”

“At this time of year, it’s the breeding season for the ‘Dark Bear’. Even I try to stay away from their territory. It’s best to run away as soon as you see one” 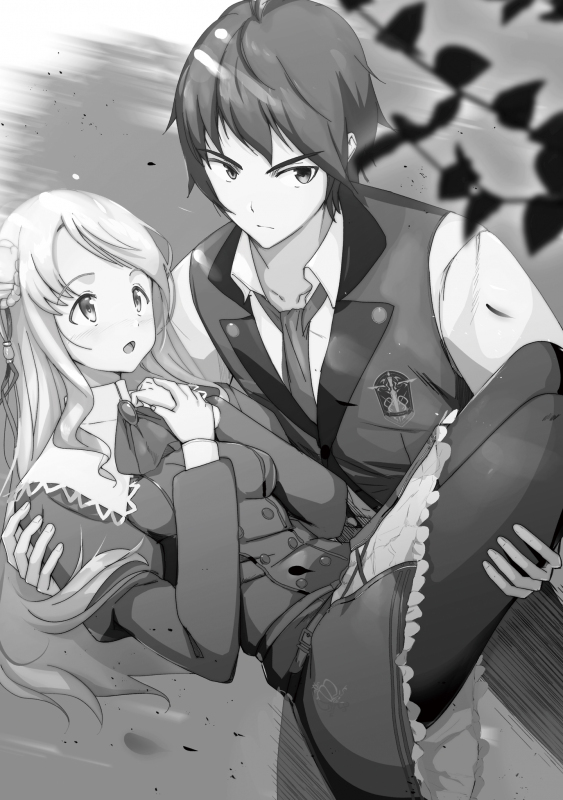 “Well, when you’ve pissed off the ‘Dark Bear’ this much, it’s already too late”

The boy lowered the girl to the ground and held up his dagger.

“It should be fine here. You guys back up the old man over there”

When the boy called out, four bats emerged from the forest and headed towards the ‘Dark Bear’.

Don’t tell me…they are going to fight, too? The girl wondered.

‘Dark Bear’ is an intermediate class monster. In terms of its danger level, it’s a Stage Five’s C class.

It is a level where the girl and the old man can barely fight against it. No matter how many bats are heading towards it ──

The ‘Dark Bear’ staggered as it received blows from the bats’ body to its chin.

And also to its temples and ears.

The bats continue to attack the ‘Dark Bear’ at breakneck speed.

The ‘Dark Bear’ fell to the ground.

“No way…mere bats have the ‘Dark Bear’…”

The ‘Dark Bear’ groaned as blood flowing from its head.

The bats’ wings and their claws are like sharp blades. They easily cut through the body of the ‘Dark Bear’ which was protected by its thick fur.

The reason they didn’t attack its torso was that the old man was attacking it with his axe.

“This is amusing! I’m fighting with bats!!”

“Amazing. The bats…are coordinating with the old man…”

The girl was amazed by the scene happening in front of her.

The bats retreated just in time for the old man to swing his axe and then charged forward the moment he finished swinging.

The wounded ‘Dark Bear’ wasn’t even able to stand up.

“Can you still use magic?”

“Please use the fire magic again. I wasn’t able to see it clearly earlier”

“Y-Yes. I do have some magic power left”

“Shoot it when I give you the signal”

The boy starts running with a dagger in his hand.

She couldn’t catch his movement. Even for a ‘Body Strengthening, Boosted’ magic, it was too fast.

Such speed was not possible with Level 1 ‘Ancient Magic’.

“‘──── The source, a crucible of heat…’”

The girl begins to chant the incantation for the magic just as the boy had instructed her.

The ‘Dark Bear’ looked around, to the left and right, but it couldn’t grasp the boy’s position.

The boy went to its blind spot at high speed and thrust his dagger into the back of the ‘Dark Bear’.

The boy pushed the dagger into the monster’s body.

However, it was shallow.

The dagger can cut the flesh of the ‘Dark Bear’, but it can’t reach the heart.

(It stopped moving. Now’s the moment!)

When the girl was about to activate her magic.

Blood gushed out of the chest of the ‘Dark Bear’ as a sharp, icy blade pierced it.

The girl understood it in an instant. That is normal ice magic.

‘Dark Bear’ has tough body fur. Both fire and ice can be resisted to some extent.

That’s why the boy wounded the ‘Dark Bear’ and cast ice magic from there.

“No, ‘Dark Bear’ has strong vitality”

The boy kicked the ‘Dark Bear’ in the back and leaped away.

“Just in case, please deal the finishing blow! So that I can clearly see how Ancient Magic can defeat them!!”

When the girl activated the ‘Ancient Magic’, flames flew out, and the dying ‘Dark Bear’ was subsequently devoured by the flames.

“The old man over there! Dick and the others too, please get away from it, there will be flames heading towards it soon”

“You over there. Use your fire magic on the remaining ‘Dark Bear’!!”

Just as she was told, the girl continuously activated her magic.

Flames were sent flying to the ‘Dark Bear’ that was fighting against the old man.

The ‘Dark Bear’ which was bleeding from its head and torso, couldn’t evade the magic.

Its whole body was bathed in fire and collapsed.