New chapter is available in the Manga!

[Click Me] to be redirected to TRM Manga page

“Kurt in a school uniform! It really does suit Kurt, you look so cool in it!”

Soon after checking out the results, the uniforms of Rosanlila Magic Academy were handed out to the successful candidates, so I quickly put them on.

Hmm. Looks like it’s made of pretty good material for this world.

“It looks good on you too, Lara”

Her skirt fluttered as Lara spun around.

I didn’t mean it to be flattery or anything, but I did think she’s really cute.

Well, there’s also that. Maybe the shirt wasn’t the right size, but the buttons were about to pop from Lara’s bountiful chest.

“Frolicking in your uniforms, are you guys still kids?”

Marise, who is also dressed in her uniform, let out a sigh.

“But Marise-chan, you look happy as well?”

“T-That’s not true! Wearing this uniform means that we will be seen as a student of Rosanlila Magic Academy. We have to act properly outside so that we don’t bring shame to the Rosanlila name. In the first place, you guys are……”

However, Marise also looks pretty good in her uniform.

With her neatly dressed, she’s just like Rosebella, the Goddess of Beauty that I saw 1000 years ago. |TL Note: The ‘Razebara’ name is subject to change if there’s a better version – Update: changed to ‘Rosebella’. Credits: Peregrine|

“I think Marise looks good too. You look beautiful”

Maybe that’s why such words came out of my mouth naturally.

She looked away from me in embarrassment.

We then started heading to 《First》 class.

“I’m glad to be in the same class as Kurt”

“I’ll get to see your magic a lot more often while we’re in school. I’ll catch up to you soon, so be prepared for that!”

Apparently, I’m in the same class as Lara and Marise.

I’d be lonely if I had no company with me, and besides, these two are talented in magic.

Thinking ahead, perhaps it could be said that I’m lucky to be in the same class as them.

When we arrived in the classroom, including us three, there were about 30 students in 《First》 class.

“First of all, everyone. Congratulations on your successful enrollment. I’m Erika, the homeroom teacher of this 《First》 class”

Sensei told everyone so as soon as we took our seats.

Although she is a woman, she seems to be a strict teacher.

“You can affectionately call me ‘Eri-chan’”

As if trying to cover up that awkward silence, Erika-sensei cleared her throat.

“All of you will be spending the next three years in this school. It’s up to you to decide how you want to spend your three years here. You could use them for rigorous magic training, or you could be diligent in your research. But let me tell you one thing. For those who dilly-dally for those three years, even if he or she manages to graduate from the magic academy, they would have a bleak future ahead of them. I want all of you to keep that in mind and have a fulfilling life for the next three years”

The atmosphere in the classroom became tense after that.

Only Lara waved her hand and called out Sensei’s name in a cheerful voice.

“Well then, let’s start with a self-introduction. First, the top student, Kurt” 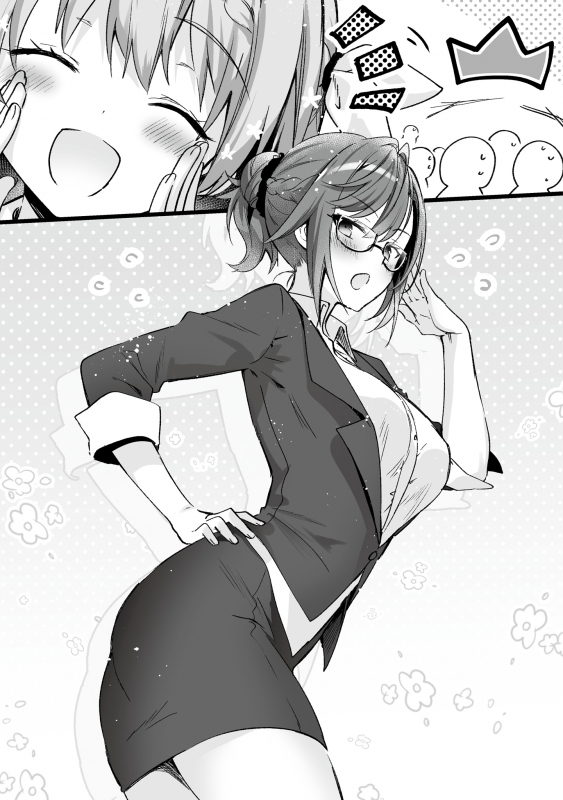 She looks at me.

What should I say?

Well, I don’t have to be like Erika-sensei, trying to be funny.

With that thought in mind, I moved back my chair and stood up.

“I’m Kurt. Kurt Lepracta. I hope to live a peaceful and happy life in this school. Nice to meet you all”

After finishing my introduction, a weak applause followed, and the students began whispering to each other.

“Kurt who passed as the top student…. Ahh…he was the examinee 99, right?”

“That’s not all. In the practical exam, he was able to make a huge ‘Holy Sword’ appear, and he seems to have won against Desmond-san, too”

“But I heard that he has the ‘Defective Magic Power’? It all just sounds so unreal! I didn’t watch the fight…but it must be a lie!”

I wonder if it’s because I was being a little too conspicuous during the entrance exam?

Even though it’s only my first day at school, it’s like I’m already famous.

“Excuse me! May I ask a question, Kurt-kun!”

One of the girls raised her hand and stood up.

“You can ask the examiner about that”

Seeing that, Erika-sensei decided to reply on my behalf.

“It means exactly as it is. Kurt does not fit into the 300 points category”

“To be precise, we couldn’t score him. That’s just how it is. Ah, right…Kurt. Can you try to solve this problem?”

said Erika-sensei as she writes out a magic formula on the blackboard.

Hmmm..….it looks like this is the magic formula of Ifrit Flare.

In my previous life, it was a high-ranking magic.

I never thought I’d be able to see something like this in this era….

There are far too many errors.

As it is, it will go out of control and the magic won’t be able to activate properly.

“Oh? It’s wrong? Then please write down the correct magic formula for me”

I didn’t expect that she would suddenly set me up.

“You may use this piece of chalk”

Before she could even blink, a new magic formula has been written all over the blackboard.

“I didn’t want to start from scratch, so I just projected the magic formula in my head directly onto the blackboard. Is there a problem?”

Erika-sensei quickly adjusts her glasses and takes another serious look at the magic formula I wrote.

“WOW……! Amazing!! This one is certainly more logical and beautiful!! I don’t think I have enough magic power to materialize it…but I really didn’t think it was possible…!!”

For some reason, she looked very excited.

“I-I’m sorry. It seems like I was overly excited”

Sensei nodded and then replied,

Does that mean I’m wrong…?

“There’s no correct answer in the first place”

“What do you mean by that, Sensei?”

“This is one of the ‘Lost Magic’ which has been lost in the annals of time. There’s no one in this school—or even in the entire world who can handle this”

Even if it’s a high-ranking magic, anyone who could use a little bit of magic, can cast it continuously, right?

It’s the kind of magic that’s suitable for attacking a large area.

If the enemy hadn’t set up a barrier, an entire city could be blown away easily. And after the magic revolution happened a thousand years ago, it was common to have this level of magic that can destroy entire cities.

For that reason, it was a common practice to set up barriers that cover entire cities.

“However, the remaining descriptions of the ‘Lost Magic’ in the old literature……we tried to decipher and restore it as much as possible, and the result was the magic formula that I had written earlier……but the formula written by Kurt is much better. It’s on a different level”

Sensei muttered to herself.

In contrast, the students who were watching as this whole event unfolded,

“Is a magic formula supposed to be that long?”

“Wouldn’t it take an hour to set up that magic formula during a battle? And what’s with the structure of the chant?”

“……So everyone understands, right? In the exam, there was also a similar problem like this. After much consideration, we had no choice but to give him an ‘∞’ score. Needless to say, he’s the undisputed top student”

Upon hearing this, nobody argued that statement.