“Now then…. I’ve finally gotten some money. With this, hopefully, I can get a good sword”

I murmured after leaving the guild.

“Three hundred gold coins is just…some money!? Kurt, just how rich are you!? You must have lost your sense for money”

No sense for money, huh?

Three hundred gold coins is a lot of money.

It seems that the monetary value hasn’t changed much since my previous life, so I can understand that much.

However, if I really want to buy a good sword, then three hundred gold coins just isn’t enough.

For example, a thousand years ago, the ‘Magic Sword, Riadojiku’ had a value of two hundred million gold coins.

It is said that a single swing with that magic sword can destroy a country, though that’s only limited to places that do not have a decent barrier.

…Well, I did make that magic sword myself.

“Kurt. It’s a silly question, but didn’t you think of making one yourself?”

“Marise-chan! There’s no way a sword can be made that easily!”

“That’s just impossible! After all, Kurt is a mage, remember? He is not a blacksmith ──”

Hmm. Lara’s reactions are so amusing that I never get tired of watching it.

“I’ve had swords before, but they never felt right. So I learned that it’s faster to make one myself”

Of course, this is a story from my previous life.

“It’s faster to make one yourself…. I don’t think that’s normal”

Marise replied with her arms folded.

“I can also make it now. But there isn’t enough material. To create a sword that can satisfy me, I might need to at least dive through one hundred layers of the <<Treasure Labyrinth>>”

But then again, it’s a small labyrinth, so it is a question of whether there are materials that I need even if I go up to a hundred layers.

Buying a sword now is just a means to an end.

“So…do any of you know of a good weapon store in the royal capital?”

When I asked, Lara and Marise almost simultaneously replied.

“I know! It’s No.1 in the royal capital…no, the weapon store is said to be the best in the world!”

“That weapon store is famous. That’s why people from all over the world came looking for their weapons there”

“Then, let’s get going, shall we? I’m counting on you two to guide me there”

We arrived at the weapon store they had mentioned, but I was shocked when I walked into the store.

“This is the best weapon store in the world…?”

From my point of view, none of them look like much.

“As expected of the work of the famous craftsman, Vera-san”

“These are all magnificent items”

Lara held a sword, and Marise held a bow. Their eyes were sparkling.

Do they really think that the weapons are good?

…Neither of those two weapons has been enchanted with magic, you know?

As we walked around the store, Lara spotted a piece of armor.

“Even if a Behemoth were to trample it, it wouldn’t budge”

Marise is also admiring the armor.

Indeed, the iron armor is so sturdy in appearance that it seems capable of withstanding attacks from all sides, too.

“That armor is nothing much, you two. This one over here is much more impressive…than that”

I picked up the armor on the opposite side of the iron armor.

“I-It’s just a swimsuit, isn’t it!? You can’t defend against an attack with that…. Kurt is ecchi!”

“What are you talking about?”

This is the protective gear known as ‘bikini armor’.

“Don’t be fooled by its appearance. It seems that this bikini armor has been enchanted with magic resistance. This armor will protect you from attacks better than that merely heavy and hard to move armor over there”

However, the magic that it has been enchanted with has many defects and far from useful to me…but still, it is somewhat more useful than the armor that Lara and Marise focused on.

“Really? You are not just distracted by ecchi thoughts, are you…?”

“In that case, you should try it on. Because then Marise might understand, too”

I’ve heard that it takes girls a long time to get dressed. So let’s use magic to get her changed in an instant.

Without waiting for a reply from Marise, I snap my fingers.

Then, Marise was enveloped by light in an instant, and there she was, wearing the bikini armor.

“Whoa, Marise-chan! It looks good on you!”

For some reason, Marise, with tears in her eyes, tries to cover herself with both of her arms.

As Lara said, the bikini armor looked good on her with her good figure.

She has slender white limbs and small but well-shaped twin hills. Her buttocks are firm and supple.

Hmm. Not only magic, but I can see that she also trains her body. She really does have a good body.

“…It’s amazing. Somehow, I can feel the magic power all over my body. It’s like I’m getting warm…aah, the feeling is kind of addicting”

“B-But it’s still embarrassing after all! Besides, I don’t want to rely on Kurt all the time. If I want to buy one, I’ll save up and buy it myself!”

With another snap of my fingers, I returned Marise to her original dress.

I look away from Marise, who is blushing with embarrassment, and walk around the store again.

It was hard to find anything good, though.

“Do you have any weapons that…oh?”

Still looking for a weapon, I found it in an inconspicuous corner.

“Oh…? This seems to be serviceable”

I held the sword and was about to use my analysis magic, Analyse, to find out more when ──

“Mm, the boy over there. You’ve noticed that sword?”

Before I knew it, there was a girl with a striking pair of big, round eyes standing in front of me.

“Oh, just now, you must have thought I was a child, didn’t you!? That’s not true. I’m the owner of this store, you know?”

The girl puffed with pride.

However ── perhaps because I’d just met Angelica ── I couldn’t believe that the petite body, flat-chested girl was telling the truth.

“Hm, Lara. Is this child the one you called the famous craftsman?”

“She’ll get angry if you talk like that. She has been out in public a lot, so I know her face”

Hmm, it seems that this girl ── Vera, is telling the truth. 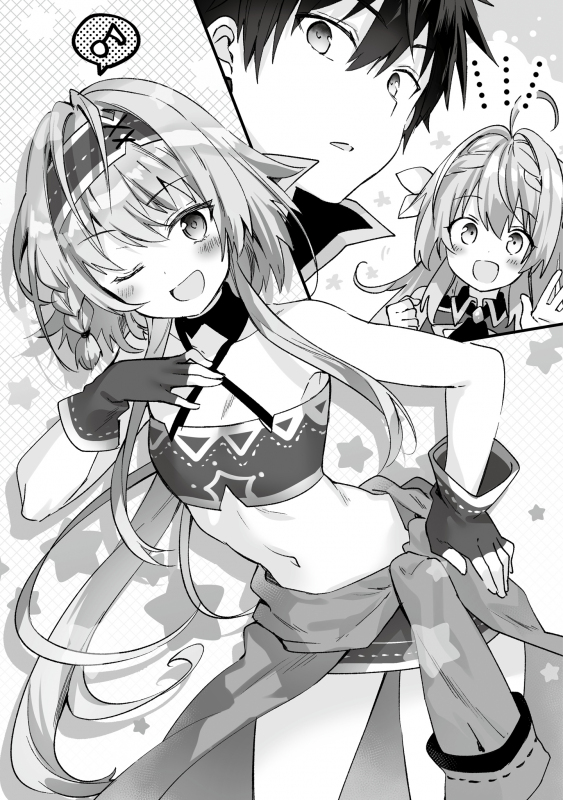 “Do you believe me now?”

“Then that’s good! Well, let me tell you something…. That’s the best weapon in the store. I’ve been keeping it out of sight for a while now…, but how did you notice it?”

The store owner looked at me suspiciously.

“First of all, processing the material Orichalcum is good, and that must have taken a lot of time. It’s been done with such care that it’s still eighty-seven percent pure, and it’s clear just by looking at it that every micrometer of it has been taken care of”

“Boy, you know your stuff! I’ve heard your earlier exchange about the bikini armor, too. Most people only look at the armor on the other side. However…, you’ve found a really good piece of protective gear out of all of them. I thought it was just a coincidence when you noticed the bikini armor, but it looks like that wasn’t the case”

Vera was all smiles.

“I like you! I didn’t expect you to see through it so much at a mere glance. If it’s you, I’ll sell you that sword!”

As she clenched my hands tightly.

This sword is definitely the most decent thing I have seen so far after I have reincarnated.

This gave me a sense of Vera’s ability as a blacksmith.

And so I asked her.

“Don’t be surprised when you hear it. It’ll cost…a hundred gold coins! Not a cent less!”

“Fufufu, was a hundred gold coins a little too much for you? But do continue to work harder to buy this sword, boy! As for you who have seen my excellent sword, you should be able to buy it if you work hard as an adventurer for three years…no, one year…wait, eh!?”

Vera, who was talking pleasantly, suddenly looked surprised when she saw the pile of gold coins in the bag.

“A-Are you a child of nobility…? In that case, that makes sense. You have received special education ever since you were a little boy. So that probably explains why you were able to see right through the weapons I’ve made. Haha, hahaha!”

Vera gave a nervous laugh and stepped back.

I’m not a noble, though. She seems to be mistaken.

“Well then, from now on, that sword belongs to you! Take good care of it”

“Thank you very much”

I gripped the sword again and held the blade up to the light.

“Kurt, good for you! It really suits you!”

“Yes, it sure is cool…, rather than that, Lara! You don’t need a cool weapon! Functionality is more important!”

While Lara and Marise were fussing about something, I had finished analyzing it.

“All right, let’s go work on this sword at once”

When I said that, Vera’s eyes couldn’t have been more widely opened.