Lara opened her eyes even wider in surprise and spoke louder.

I could not determine whether it was her father or mother, but… it seems like I got it right.

“I’ve seen Lara’s magic power many times. After all this time, there’s no way I won’t notice.”

“I-Is that so… Kurt really is amazing. You know everything.”

It was not only humans.

There were parts of the magic power that were quite similar to spirits.

It was mixed with a human’s magic power, so it was not possible to identify it immediately.

I have met spirits in my previous life.

A great spirit would have a body structure similar to that of a human, so it would theoretically be possible for a spirit to have a child with a human.

As expected, I had never seen a mixture of human and spirit magic power… Thousand years ago, people and spirits distanced themselves from each other. So it can’t be helped.

“I don’t remember much. She died when I was very young.”

“I see. Is it perhaps difficult for you to talk about it? If it’s hard, you don’t have to force yourself.”

Lara continued as if she had made up her mind.

“My father married my mother, who was a Great Spirit. But… a child born between a human and a spirit is creepy. That’s why I was bullied when I was little.”

“It’s not very common. There will be some idiots like that.”

“Yeah, maybe because it’s not common. There are others, but… I’ve never seen them ── and anyway, children born to other species are considered creepy.”

I do not mean to dwell on race, but… I think I understand her feelings.

It was almost like a different being from a different race. It has not been common for humans to live with spirits or demons for a thousand years.

“So I fled the village with my father after my mother died… and in the next village, I lived hiding the fact that I was the child of a human and a spirit.”

“Was it because you thought you would be ostracized again?”

Lara nodded in response to my question.

“I have been trying to make friends in the village by being cheerful. I didn’t want to be alone anymore. Maybe because of that, I made some friends there.”

She may have been pushing herself, but it was probably due in part to Lara’s natural cheerfulness.

“Then why leave that village and come to the royal capital? Did you want to enroll in the magic academy that badly?”

“Yeah… Listen, Kurt. I hope you won’t laugh, but I want to go to the Magic City of Sternia.”

As I recall, it was an imaginary city where those who had mastered magic or spirits were supposed to go after they died.

“I don’t remember much about it, but my mother always looked apologetic when she saw me being bullied all the time. She would say, ‘I’m sorry,’… But I am grateful that she gave birth to me. So I want to go to the Magic City and tell my mother, ‘Thank you’. That’s why I came to the Magic Academy. If I studied magic here, I thought I could learn something about Sternia.”

“Oh, you thought I was being childish, didn’t you? You don’t think there is such a magic city, do you?”

It is a fool’s errand to assume something is impossible and not try before doing it.

I do not know when the legend was made, but there must be a reason why it was created. Just because it might be hard to find doesn’t mean it does not exist.

said Lara, and she then went on with a sudden look of anxiety.

“Hey, Kurt. Don’t you hate me? Won’t Kurt be weirded out by the fact that I’m a child born between a human and a spirit? Will you continue to be my friend?”

What, she was worried about such a thing?

I cannot help but smile.

I stroked Lara’s head and said,

“Why would I hate you? There’s no way I’m going to hate Lara for that reason.”

A child born between a human and a spirit is rare.

So why should we hate them?

No matter who a person or a spirit loves, what does that have to do with others?

“Thank you… Kurt, I’ve been worried about this for a long time that Kurt would leave me after I said it.”

“It’s an unnecessary worry. Let’s go back to the dormitory now. We’ve walked around enough.”

I turn my back to Lara.

At that moment, Lara called out to me again.

The moment I turned around ── Lara’s face was right next to mine.

Lara pressed her lips over mine.

I could clearly hear Lara’s breathing. And I could feel her body temperature rising through her lips. 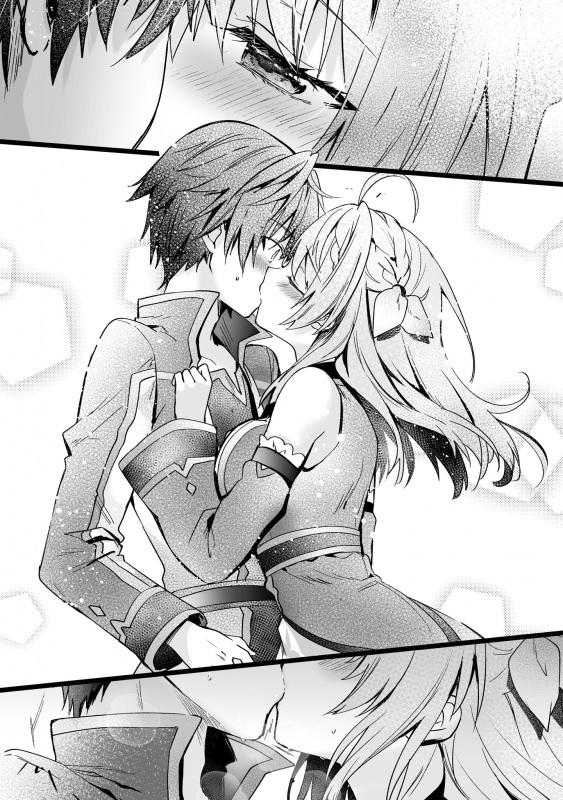 After a while, Lara pulled her face away.

When I recall the sensation of the kiss earlier, I feel like I’m no longer my usual self.

“You are wrong. And not just today. I have received so much from Kurt.”

Before I could respond, Lara hurriedly turned away.

Her earlobes were so red that even from behind, I could see that her face was bright red.

Seriously… What was that all about?

I was more puzzled by this than by the fact that Lara was the child of a human and a spirit.