Anastasia and I went to the magic academy together, and on the way there, we met a familiar face.

Abe of the Portes family walked towards us with a confused look on his face.

“Oi, Anastasia? What’s the meaning of this? No, why are you with that human…?”

“Why don’t you say something? Just exactly what’s going on here? Oi-oi? What’s this all about? You haven’t forgotten your orders, have you?”

The words freaked Anastasia out and made her shoulders tremble.

Well, she has been forced to obey this family until now, so this reaction is understandable.

“Hey, bastard, you did something?”

Abe grabbed me by the collar.

“I don’t know if she seduced you or what, but are you going to get along again with the girl who stole your artifact? You still call yourself a man? Don’t you have that thing hanging in between your thighs? Oi!?”

Nuh-uh…. I shrugged my shoulders in boredom, wondering if this guy is an idiot.

What is he doing, spreading around how he’s pulling strings behind the theft of artifacts…?

“Err, it’s true that the Raikiri (Lightning Cutter) is gone, but does that mean your family led the theft?”

Hearing my words, Abe hastily released his grip on my collar.

“Huh? Theft? What are you talking about?”

“It’s too late for that… besides, how could I not have heard anything from Anastasia?”

When I said that, Abe’s mouth twisted into a grin.

“Huh? Where’s your evidence? Do you want to cast an accusation on the Portes family of the noble demon solely based on the testimony of a bitch? I’m going to crush you for disrespecting us, you bastard!”

Defiant intimidation, huh? He seems to be a scumbag to the bitter end.

“It seems that you’re expecting something from this piece of trash when you told him what was going on… but you do understand, right? Go against the contract, and you’ll die like a ragged cloth, you know? There’s nothing a human swordsman can do anything about it!”

“Huh? Have you finally lost your mind!? Or rather, we’d also be troubled if you were to be punished by death for violating the order and contract! Hey, explain! What’s this all about!? You don’t really want to die, do you!?”

Anastasia looked at me anxiously.

“Come to think of it, you seem to have had some special feelings for this human… oi-oi!? Is this some sort of love story or something where you choose to die? Seriously, give me a break!? You can at least do addition and subtraction, right!? Die or obey orders, you know which is better for you, don’t you? What kind of an idiot are you!?”

“What’s so good about him anyway? You sure you’re not out of your mind? Are you stupid? Just how stupid can you be!? This is seriously unbelievable ──”

It was the sound of Anastasia slapping Abe’s right cheek with all her might.

With a look of disbelief, Abe rubbed his slapped right cheek.

“I won’t obey you guys anymore!”

To follow up on that ── Anastasia’s straight right landed smack dab on Abe’s nose while he was still dumbfounded.

Nice! Looks like she matured, like a child who learned to do it when they had to. This child.

Seeing that blood was flowing down from his cut lip and broken nose, Abe shouted.

Abe is furious, making his vein pop out.

Without taking a step back, Anastasia glared at Abe.

“I don’t mind you insulting me. But I can’t put up with any more of your… abusive language against Master”

“It seems to me that you really want to get killed”

I can see the magic power gathering around Abe’s right fist.

Ah, this guy… is going to hit a girl. And with all his power, too.

Moreover, if it’s at the magic academy’s standards, it looks like his combat abilities are high, so this isn’t good.

And so, as Abe is going to punch Anastasia in the abdomen ──

I stepped in and, with one hand, caught Abe’s fist right in front of him.

“Inferior species!? This has nothing to do with you!”

Ah, he is really troublesome.

“To the point of being ── a really annoying brat”

So, let’s give you a little pain, shall I?

I put a little bit of pressure on Abe’s right fist that I was holding.

I let go of his hand, and Abe continued to grovel on the ground,  screaming, “Arghhhhh”.

He’s a dramatic bastard. It’s not like I crushed his hand.

── I could feel it creaking, so there must have been some cracks.

“My condolences. You may be in the magic swordsman department, but you won’t be able to hold a sword for a while, you know? Well, I don’t think you can hold a sword in this academy… not anymore anyway”

“I spent the weekend… investigating the ledger at your mansion. And also, your treasury”

“I’ve always been thorough with those who antagonize me. And I usually do not fight with anyone but scumbags. If you look closely at what they’ve done, you’ll often find one or two pieces of evidence against them. Again, I was dead on this time, too. It was a blunder to leave documents that showed interacting with the Marx mafia family lying around. 100% percent sure that you can’t talk your way out of this one now, you know?”

Abe’s eyes widened in surprise at the mention of the Marx family.

“Don’t tell me… you really snuck into the mansion?”

“The security might as well be paper to me”

“You can open up the treasury when you get home. All the documentation should have disappeared”

“But if you did that, then you too will be charged with theft…”

I sneered at Abe and said,

“The words you said to me earlier, I’ll just say it back to you. You have no evidence that I stole it, right? Or do you think you’ll be able to produce evidence when it seems that you guys are not even aware that the documents were stolen two days ago and are still missing?”

“Yeah, yeah. The anonymous chivalrous thief left the proof in front of Headmaster Merlin’s room. The headmaster, who detest unjust conduct… is probably in the middle of a conversation with the noble body in the royal capital right now”

“If you do that, our family will be…”

I stuck out my right hand and made a thumbs-up gesture.

I then flipped my hand over and pointed my thumb towards the ground.

“It’s over, you bastard. I absolutely won’t forgive anyone who made my people cry. That being said, I must ask you to leave, okay?”

To Abe, who was standing there, stunned, I repeated what I said again ── in a firm voice.

And so Abe fell to his knees right then and there, slamming his hands on the ground as he shouted.

As I started to walk towards the magic academy, Anastasia grabbed the hems of my right sleeve.

So I led Anastasia by the hand.

At the fountain park in the Round Plaza.

The warm sunshine is pleasant in the cold morning air.

And there, we were having breakfast on a bench in the plaza. Usually, we eat at the academy’s cafeteria, but today we had to make a detour.

We were busy filling our mouths with our sandwiches as we watched people hurriedly go about their work and studies.

“Um… Master? There’s something on my mind”

As usual, she kept her gaze down with her bangs still obscuring most of her face, so I couldn’t see her expression.

“Yes, my sister died in accordance to karma… and in the midst of all that, I’m the only one that’s been set freed… so I wondered if I deserved to be happy”

As Anastasia looked off into the distant sky, I shook my head.

“You’ve lived all your life on rubbish heaps… dirty streets. In that case, join me and live on a beautiful street from now on, while we clean up the trash”

“She’s probably living together with you, right?”

I made a fist and tapped Anastasia lightly on the left side of her chest.

“Your sister… is alive and well in here. In your heart. If so, together with your sister… you can live clean from now on. Live on for your sister proudly, to the very end”

“…That’s just spiritualism. In reality, my sister has already… passed away…”

I shook my head.

“In the Demon King’s castle, and elsewhere… many of my comrades in arms have already died. All in order to send the Four Emperors, humanity’s decisive weapons, to the Demon King without fatigue… and unharmed. Many have died at the time. However, they are… still alive and well here, in my heart”

I tapped the left side of my chest with a solid thump.

“Hey, Anastasia? The people who died so that I could live? Can you say that… I lived because of them, and now I’m living a reluctant and unhappy life? You can’t say that now, can you? That’s why you have to be happy”

Thinking for a moment, Anastasia nodded with a frail look on her face.

“Smile. From now on, for your sister’s share… smile lots”

With another nod, Anastasia stood up and stepped in front of me.

“…Master really never fails to surprise me…. You really, really… keep surprising me, over and over again… it’s bad for my heart. Are you doing this to harass me by any chance?”

“Well, I’m not trying to be mean though”

“Um… to tell the truth, I was a bit ── displeased with that side of Master”

Anastasia then move her face closer to mine ──

── Her lips gently touched mine.

“…Hehe. I hope this managed to surprise Master a little bit” 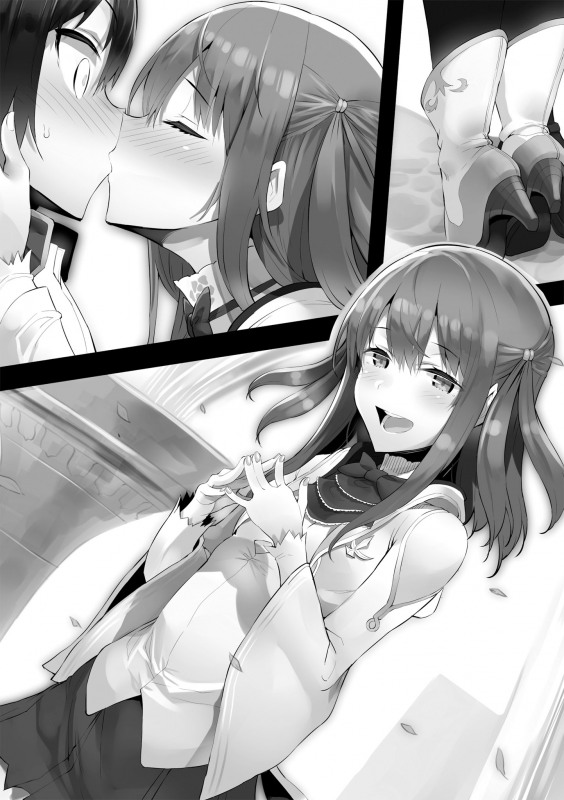 Perhaps for the first time since we met, she looked straight at me face to face, but ── with her bright red face.

“I love you very much. Master”

She got me, I thought to myself.

When she’s so straightforward with her affection, even I… don’t know what to do.

As I was still at a loss for words, Anastasia, embarrassed, dropped her gaze to the ground again.

“Uh… I’ve just… decided. I am… going to live my life smiling a lot more from now on. Together… with Master”

Good grief…. She totally got me.

The punchline this time is that the Emperor of the Thunder God is troubled because of what a little girl did to him.

Damn it…. If the other three Emperors saw me like this, they’ll laugh at me forever.

Well… it can’t be helped, so instead of hiding my embarrassment, I stroked Anastasia’s head briskly.

“Hehe, it’s rough, but… it’s still somewhat gentle. Merlin-sama was also happy to have this done, and I can see why now”

Even though I can’t see Anastasia’s expression because of her drooping bangs, I know she’s probably shyly smiling with a bright red face…. That’s what I thought.