Hm? Why is Merlin the only one who stayed…? Everyone seemed to have the same question as I did, and they all looked at Merlin curiously.

At the very front of the lecture hall, on the platform, Merlin certainly did mention, “Sasha”.

Merlin-san? What do you mean by that?

“For Headmaster Merlin to attach ‘-sama’? Sasha-sama can’t possibly be…?”

From the voice of just one student, the whole lecture hall began to stir.

I mean, that is the last person I wanted to see, my master…

Well, I knew my master is still alive because the literature confirmed it.

And so Merlin called out to my master in the backstage.

“Well then, please make your appearance to everyone. Sasha-sama.”

“Hmm. My apprentice’s apprentice. Bastard, you’re just as unreserved as Ephthal that you want me to take care of the fledglings for you. Only that odd part of you makes what teacher and student alike…”

Master appeared on the platform in a gothic lolita style dress that was see-through in places to highlight skin tone. The waist-length silver hair was adorned with a black ribbon, and the eyes were gold in color.

If things had not changed since then, master would be 145 centimeters tall, weigh around 34 kilograms, and have the appearance of… a 12-year-old.

Master is not only cute but also frighteningly beautiful. A beauty that can even be described as bewitching.

Yes, that is my master, Sasha.

Sasha was originally a human, but has mastered necromancy while practicing magic during leisure time, and became a True Ancestor (vampire). 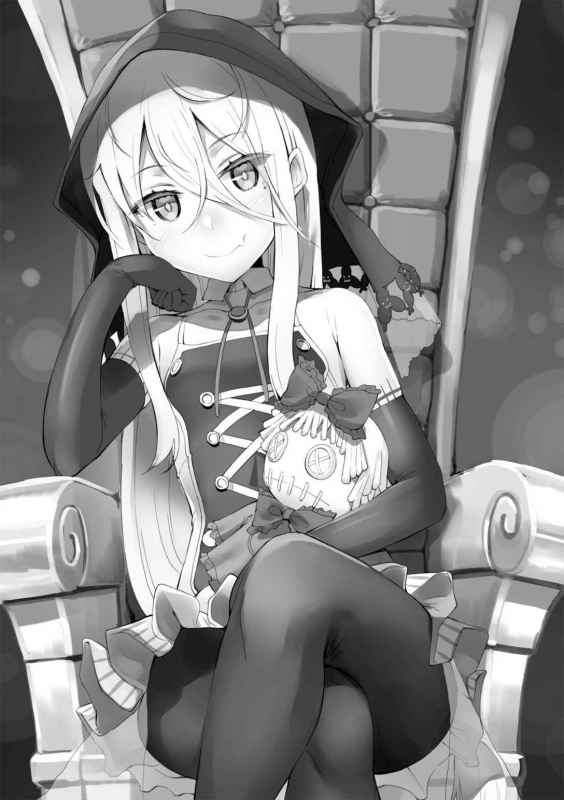 Because there are barriers that separate us, there is a framework called ‘race’ or ‘species’, so that is a given.

Generally speaking, the only person who has ever become a vampire in human history is probably my master.

And since master is a vampire, a terribly long lifespan is a given.

On top of that, there’s also the power of the secret method that keeps master from aging during sleep. And since master is usually asleep, master has already lived for more than a thousand years, this ancient mage… no, a monster.

Anastasia knows that I am Ephthal.

She was looking at me with a worried look on her face as if to say, “Will it be okay if you meet an old acquaintance and get found out?”.

I’m not sure what Merlin’s goal is in bringing Sasha out here.

But even if master finds out about me, it will only have a little effect… No, with that kind of nature, it is definitely going to be a hell of a lot of trouble.

“This time, the training camp has a wonder child that even Sasha-sama will be surprised by ── so please forgive my rudeness.”

“Well, I’ll trust you in consideration of my foolish apprentice. However, if you disappoint me, you will pay for the consequences. Frankly speaking, there’s no way I would supervise fledglings.”

With that said, master is wearing a cute hat with embroidery on top of a frilly dress.

Moreover, master is also holding a doll of a girl that is also wearing a frilly dress.

One can say master looks like a necromancer, but master really is one.

“But you talk like an old holy woman. If you’re the master of the Four Emperors, Ephthal-sama, then you must have tremendous power…”

So, as Sasha’s apprentice, I must immediately correct Maria’s misunderstanding.

Because master hates that sort of misunderstanding the most. No, if that’s the case, master shouldn’t have dressed so puzzlingly.

“No, that thing is a sage. Or rather, a great sage. An outrageous great sage.”

Maria asked me back with a straight face.

Well, I understand how she feels. I also made the same mistake when we first met a few hundred years ago.

It was such a shocking fact that she could not even pronounce it correctly.

“Sasha. His real name is Alexandre Smirnov. A 1,200-year-old Otokonoko.” [Editor’s Note: Otokonoko basically means a guy who is quite feminine can be in looks or behavior. Another term that would fit: ‘trap’]

When Maria is still shocked by that fact, master teleported from the platform to where we stood… or rather, he leaped here with level 8 magic.

He was able to activate the magic formula almost instantaneously, without me even noticing him manipulating magic power?

Haha, he is so monstrous that it really is quite laughable.

Even Merlin did not know what had happened and just looked around restlessly at his sudden disappearance from the platform.

And then, master was standing intimidatingly in front of Maria and me, smirking and said.

“Hmm, that little elf over there?”

Not knowing what Maria was thinking, she prostrated herself on the ground.

“No, no, it’s fine! More than that, are you really that surprised?”

“Kufufu, you are really that surprised, huh…?”

Master looks really happy, even smirking. And at the same time, I sighed.

Good gracious, if it were not for this habit of his, he would be a respectable mage.

“By the way, why were you surprised?”

“Well, that such a beautiful and cute girl is a man.”

This person is 1,200-year-old and is pursuing cuteness… even though he is a man.

Yeah, he really is too much. That was why I became independent as soon as I could and distanced myself from this person as much as possible.

“Anyway, I like this little elf! Magic is all about the ability to see the natural world as it really is. In that sense, you have a good chance of being able to evaluate cute things as cute!”

“Thank you very much.”

Then master took one look at my face ──

“Oh, my name is Ephthal Alcott.”

“…Hm? Isn’t that the same name as my foolish apprentice?”

Perhaps this person… has not noticed me yet?

No, in that case, that would be good for me. Then let me speak to him as Ephthal-kun, not as one of the Four Emperors, Ephthal.

“I’ve always been told it’s heretical to have the same name as the Four Emperors.”

“But to go to Merlin’s academy and have the same name? I have a feeling that something is going on here…”

“Oh, no, not at all! But, like what Maria had said, Sasha-sama is really beautiful! No, you’re cute! Wow, it’s truly amazing, so cute!”

Sasha smiled at my words, though the last part sounded monotone.

“Yes, you really are the envy of all women!”

“I know, right? Well, even when I look at myself in the mirror… I would sometimes get attracted to my own cuteness. My beauty is truly almost a crime.”

Good, I have deceived him!

As I felt relieved, Sasha patted me on the shoulder.

Well, master is still the same as always.

In other words, if you treat him like a girl, he will get angry. He has a really weird fixation, and it is a pain in the ass to deal with.

── The gap moe is important, isn’t it?

Things like that are his favorite motto that I do not understand.

Sasha then turned to look at Merlin on the platform.

Master pointed at me.

“The meaning of placing a beautiful boy under my supervision. This person… has a very cute face. It’s outrageous, really.”

Come to think of it, my master was famous as a beautiful boy hunter.

Well, I never had a crisis of my chastity being in danger during my lifetime.

That reason being that master’s preference is for the shota type. I was 18-year-old when I became his apprentice. In fact, I was more of a handsome man.

But currently, I’m 15-year-old. And I think I have a fairly neutral face.

“A beautiful shota boy in front of me ── and you think nothing would happen?”

“Nothing is going to happen!”

I looked at Merlin imploringly ──

── Ah, Merlin is… holding in her laughter hard.

Oh, come on, Merlin! This is not the time to be laughing, isn’t it!?

“Just pretend you’re dealing with a woman. Shut up and keep your eyes closed. Fortunately, my waiting room is close by, and I have a bed ready. I’m famous for being a sleepyhead, after all.”

No, I know you always sleep when you have no business to attend to or when you are traveling in a carriage to prolong your life.

Then master grabbed my right hand and roughly dragged me away.

I looked at everyone else imploringly.

But Anastasia, whose eyes met mine first, averted her gaze from me with a sad expression.

As for Maria, she looked down to the ground to avoid eye contact from the beginning.

── You too, Brutus!

And Merlin, as before, is still holding in her laughter, her shoulders trembling.

── Merlin! You weren’t always like that, were you!?

All the other class representatives just looked stunned, their eyes blinking.

Apparently, the fact that Sasha is a man and a lustful monster seems to have not caught up with them at all.

With a scream, I was taken to the waiting room, where I was laid down on the bed right away. My uniform and undergarment were stripped off by force.

“It will only take an hour!”

My screams reverberated loudly in the waiting room.