One of them is a girl about my age. The other two seem to be bodyguards.

“I take it you are from the Sorey family.”

I bowed as per the noble’s formality.

“I’m the second son of Baron Grossalia, Yuuki Grossalia. Since you’ve stopped the carriage, is there something you want from me?”

“This is the daughter of Duke Sorey, Odette Sorey-sama.”

It was the two bodyguards who answered.

“Odette-sama has graciously offered to speak to the illegitimate son of a Baron family. It is an unbelievable blessing for a low-ranking noble, so be grateful.”

If it were not for the fact that he is the Duke’s family bodyguard, I would have already punched him.

…No, it is because I am still a novice at being human that I feel that way.

Maybe I am just incredibly blessed.

In that case, let me respond accordingly.

“I’m afraid I have to refrain myself from speaking.”

“I’m just an illegitimate son of a countryside noble. If I were to receive a word from the Sorey family, then I would have used up my lifetime of blessings. I may even die tomorrow. But unfortunately, I have orders from my father, so I can’t die before I have fulfilled them.”

“First of all, I would like to write to my father to see if he is okay with me receiving a word from the Sorey family. After all, it is an unbelievable blessing for a low-ranking noble.”

I bowed and stepped back.

When you are dealing with high-ranking nobles, the theory is to wait for them to leave.

“I apologize for the rudeness of my bodyguards.”

She has a slender and well-proportioned figure, and ample bosom. She is wearing an expensive-looking dress. Rumia would be thrilled if she sees it. After all, the Grossalia family can’t afford such a dress.

So she is Duke Sorey’s daughter, Odette Sorey.

“I got out of the carriage because I have a proposition for you. Yuuki Grossalia.”

“It has something to do with you as well. It’s about Her Royal Highness’s knight escort.”

I stared reflexively at Odette Sorey when she said that.

Probably because it was the expected reaction. 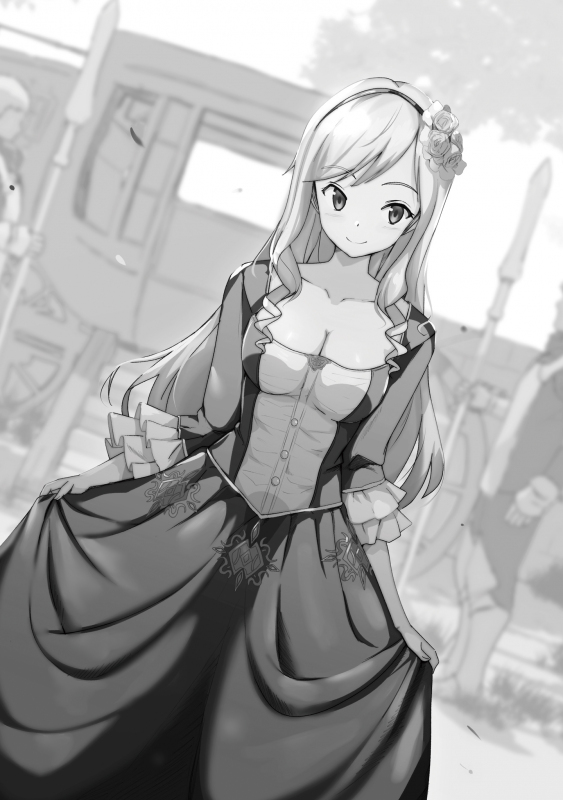 “You are aware that Her Royal Highness Princess Iris Restia will be appointing her own personal knight escort, right?”

“I am aware of it. Yes. I heard it from Her Royal Highness directly.”

“And did you know that there are four candidates?”

“It’s because Her Royal Highness can’t decide who will be selected to be her personal knight escort.”

I did not realize it until she mentioned it.

For a noble, being a knight escort of the royal family is the greatest honor.

She is the one being escorted, yet she cannot choose who will be her knight escort?

Princess Iris also said that she needed to get permission from His Majesty the King.

There must be some sort of power balance between the nobles.

“In other words, in addition to the person designated by Her Royal Highness, there are three other candidates that are to be Her Royal Highness’s knight escort. And you are saying that one of them is you, Odette Sorey-sama?”

“You seem to understand. For a mere illegitimate son of a Baron family.”

The bodyguard looked at me and said.

“If you understand, then you should immediately withdraw your candidacy as Her Royal Highness’s knight escort. After all, the one who deserves the honor of being the knight escort is our Odette Sorey-sama!”

Odette Sorey yelled at the bodyguard behind her.

“What would a Duke be if they didn’t obtain their position through their own abilities! Don’t say something foolish! Please correct what you just said!”

“Someone! Please take away this insolent fellow. Now!!”

She ordered, and the bodyguard was taken to the other side of the carriage.

“I apologize for showing you something unsightly. My proposition is simple. Please join hands with me, Yuuki Grossalia.”

“Join hands with you?”

“The other two already seem to be in an alliance. If you join hands with me, we can fight on equal terms, don’t you agree?”

“You’re saying that the other two candidates are working together?”

“I caught hold of the information. The Marquis family and the Count family.”

“Only one of us can be the knight escort, right? In other words, after we defeated the other two candidates, it will be Odette-sama and me in the end?”

“That’s still too early to say. But that’s right.”

“Of course, I’ll be the one to win. But even if I do, I will treat you as an ally. The Grossalia family will receive the Sorey family’s favor. Wouldn’t this be beneficial to you as well?”

“Please let me think about it.”

“Sure. There will probably be an examination to select the knight escort, so I’ll wait until then.”

“No, I’ll decide by the time I get to the royal capital.”

“You’re quick to make a decision.”

“Until then, let’s call it a temporary alliance, shall we? Instead of being hostile to each other, we’ll cooperate in cases of adversity. That way, we’ll also understand what we’re capable of, don’t you agree?”

“Good. I look forward to working with you.”

Odette Sorey stopped me as I was about to return to the carriage.

“Yuuki Grossalia. Is it true that you single-handedly defeated the griffin summoned by that tutor, Kachel?”

“Who told you that?”

…Father. What are you doing?

“I’m not alone. There was also Her Royal Highness and the other soldiers. We worked together to defeat it.”

“I’m sorry. I’m afraid there are some strange rumors going around.”

“Yeah. I was surprised when I heard about it. It’s not humanly possible for someone to single-handedly defeat a griffin.”

“I am a human, you know. The Duke’s daughter, Odette Sorey.”

“Anyway, you seem to be promising. I look forward to working with you.”

Odette Sorey and I shook hands.

After that, we returned to our carriages and continued the journey.

“My Lady. How was Yuuki Grossalia?”

“…He is a formidable opponent.”

In the carriage, the Duke’s daughter, Odette, was talking to her private tutor.

“A dignified demeanor even in the presence of a Duke’s family member. Quick situational judgment ability. Decisiveness. Even though we have a large number of soldiers, he was completely unfazed. He must be hiding his true abilities.”

“It’s just a rumor that he single-handedly defeated a griffin, right?”

“My father heard the story from a soldier under the direct command of Her Royal Highness. There were also other soldiers at the scene where Kachel went on a rampage, but he was the one who single-handedly defeated the griffin. Despite that, Yuuki Grossalia was not proud of it. It’s as if he has no interest in becoming Her Royal Highness’s knight escort.”

“There’s no way such a person exists.”

Odette bit her nails in frustration.

“Her Royal Highness’s knight escort is a close aide of hers. Where he or she will be taught by the same mage as Her Royal Highness in the ‘Lindbel Magic Guild’. The highest-ranking mage of the guild…”

“The future of an apprentice depends on which mage they study under.”

“Moreover, if they investigate the ‘Capital of Ancient Magic Civilization, Elysium’ and find new ‘Ancient Artifacts’, their peerage rises. If one wishes, they can receive a new peerage and territory.”

If it’s a Baron family, they become a Count family.

If it’s a Duke family, they will have the privilege to marry a royal family member.

If they do not intend to inherit the peerage, they will receive a new peerage and territory.

This is what it means to cultivate your magic at the ‘Lindbel Magic Guild’.

“Let us not make an enemy of him. For my own goals and the sake of Her Royal Highness Princess Iris’s peace.”